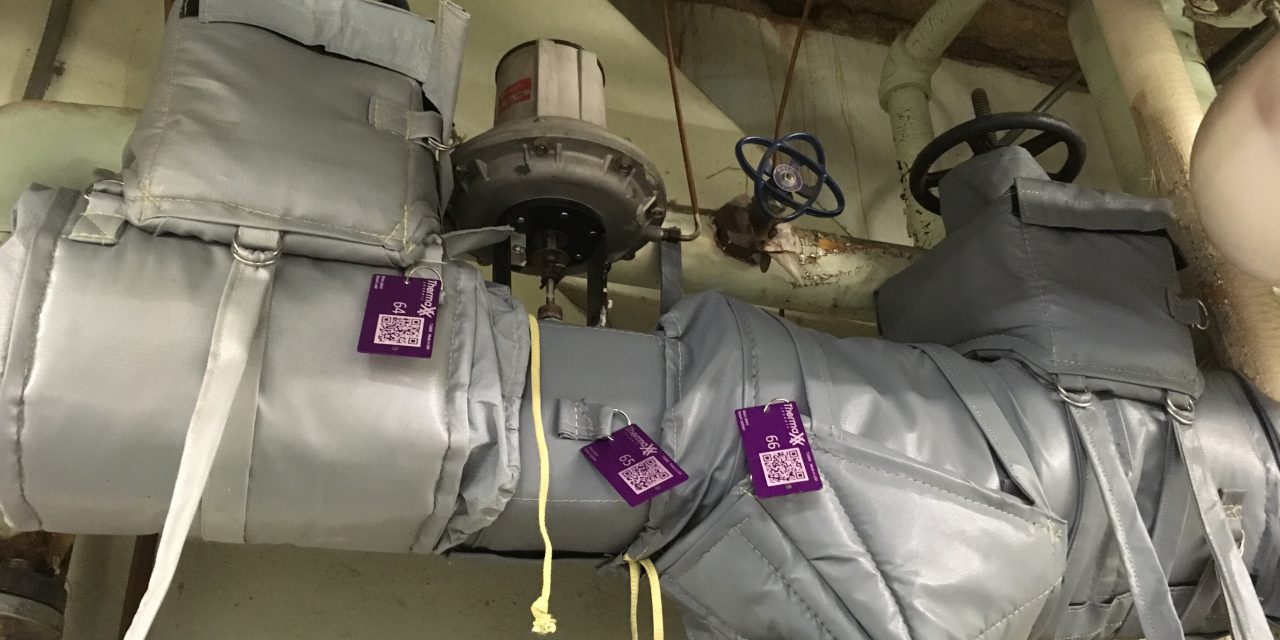 Below is an archive of case studies written by Thermaxx Jackets. If you have any questions, please contact us or view our products for more info.

The Garfield Building in San Francisco, located in the heart of the theater district, is a beautiful 28 unit building built by the Reid Brothers in 1908, and the infrastructure was totally gutted and remodeled in 2008. Dave Pritchard, the Garfield’s HOA President, reached out to ThermaXX in the Spring of 2018. Dave was passionately looking at all possible ways to become more energy efficient, and wanted to look at the potential cost effectiveness of techniques he had seen used commercially in the petrochemical and pharmaceutical industry applied in a residential application.

“Thermaxx insulated several steam traps throughout [TE Connectivity’s plant] including the incoming and outgoing pipe sleeves for each trap. We also covered about twenty bonnets and gate valves of several different sizes ranging from two and half inches all the way to twelve inches. Along with the steam traps and gate valves, Thermaxx also covered a large “Smith” boiler door which had a diameter of six and a half feet. Finally, we insulated all the steam piping that had been either previously been uninsulated or was damaged and needed replacement. There was roughly six hundred feet of pipe insulation including two areas of sixteen inch bare pipe on the boiler headers.”

“Thermaxx was contacted by Joshua in the Spring of 2018 to survey the site and calculate the savings and potential incentive offered by PG&E. Rose Titcomb from Thermaxx Jackets conducted the survey and the stats showed great opportunity for energy savings and increased workplace safety. Willdan, on behalf of PG&E, reviewed the incentive application and issued an incentive offer just over $19,000. Greatly assisting Adventist with the financial assistance needed for the serviceable insulation jacket upgrade.”

Western Connecticut State University (WCSU) serves as an accessible, responsive and creative intellectual resource for the people and institutions of Connecticut, providing higher education to over 6,000 students in Danbury, CT.

The State Government’s Lead by Example program had asked State buildings to reduce energy costs by 10% in 2013 and an additional 10% in 2018. Embracing the initiative, WCSU has committed to increasing efficiency and has met or exceeded state goals since 2011

In the spring of 2012, the University of Vermont (UVM) was referred by its distribution partner and steam specialist (Power & Process, Inc.) to insulation specialists Thermaxx LLC to help reduce energy inefficiencies by installing removable, re-usable insulation jackets on their steam equipment.

The project initially began in The Simpson Hall mechanical room, which had some common opportunities for improvement in regards to insulation best practices. Straight pipes had been insulated during construction in the 1950s, but many pieces of insulation had since been removed and damaged as a result of regular maintenance activities. Valves, steam trap stations, and other components that require routine inspection or maintenance were uninsulated. Ambient temperatures in the room approached 100°F, and UVM was concerned not only with heat loss and energy inefficiency but also with the uncomfortable work environment…

Starting in 2010, the University of Georgia and Thermaxx Jackets embarked on what has become a long-lasting relationship that has saved thousands of dollars to the taxpayers of the state of Georgia. This has been accomplished by launching a strategic three-pronged attack to properly insulate steam pits, mechanical rooms and energy plants with Thermaxx jackets and hard insulation.

Silverstein Properties wanted to insulate the front, rear, and rear circle drum of a boiler in its recently acquired property, 3 Mitchell Place in New York City. The 26 story building previously housed the Beekman Tower Hotel. The boiler was running inefficiently and posed a safety hazard because of the high temperature (267°F) of the three components. The boiler must undergo a yearly inspection by an engineer, so ensuring his or her easy access to the boiler was a high priority as well.

A large school district in the San Antonio, Texas area had a major problem with their actuator “weather protection” covers. The covers were severely affected by UV rays and quickly deteriorated to a point that rain was able to get inside the actuator and cause major shutdown problems. The school district relies on Amcon Controls of San Antonio for their valves and actuators. Upon hearing of the problem, Amcon Controls President Bob Barnebey contacted Thermaxx to help find a solution…

The Riverside Church Gets an Insulation Upgrade

“Con Edison’s Green Team has been a great partner in our Church’s commitment to sustainability. …

Unfortunately, all cryogenic valves require servicing and are traditionally left uninsulated, losing both energy and LNG as a result. In the past, these losses were accepted as part of the process, but with focus shifting to sustainability, these types of oversights are causing facility managers to search for a solution. An LNG plant operator recently found himself in this exact situation. It occurred to him that removable, cryogenic, insulation jackets could offer exactly what he needed.

Thinking Outside the Box: A University Hospital Case Study

Projects typically get off to a good start like most projects do with pre-planning and a thorough understanding of the projects purpose leading to an expansion, renovation, addition, improvement or upgrade. Engineers are called upon to bring the ideas of the project to validity and designs are drawn up reflecting the idea studies and purpose. Materials are specified to do each and every concept of the project in a way that meets the engineering demands and the projects goals…

Brooklyn Museum Gets an Insulation Upgrade

The Brooklyn Museum is an art museum located in the New York City borough of Brooklyn. At 560,000 square feet, the museum is New York City’s third largest in physical size and holds an art collection with roughly 1.5 million works. Brooklyn museum is part of a citywide push to become more energy efficient by 2025. The museum has partnered up with National Grid taking advantage of their energy efficiency program & offsetting the cost of the sustainable upgrades.

Alex Birmelin of Bettina Equities asked Thermaxx Jackets to identify insulation needs at two of his New York residential buildings; 105 and 151 Lexington Ave. Both Buildings were using a gas boiler for both heating and hot water. As a result of using a gas boiler, Bettina was incentive eligible through the Con Edison Multi-Family Program through Willdan. Thermaxx has worked for many years with Con Edison’s Commercial & Industrial (C&I) program and thought this would be a similar process, but just like with anything new there are different challenges and requirements. As the saying goes “there are many ways to skin a cat.”

Brian Pine (Energy Management Coordinator for SUNY New Paltz) reached out to NYPA (New York Power Authority) for a grant through the OMAP for pipe insulation which he was awarded in December of 2015. The Operations & Maintenance Acceleration Program (OMAP) is a suite of offerings aimed at helping state agencies go beyond capital projects and improve their facilities’ operations. Brian asked Thermaxx Jackets to conduct a campus wide energy assessment in January 2016 in an effort to make operations more sustainable. Read more.

Duke University is home of the Blue Devils, boasting a population of 13,000 undergraduate and graduate students and world-class faculty. Duke has an unyielding commitment to spreading and applying knowledge in service of society, both near the North Carolina-based campus and beyond. In 2009, Duke launched its Climate Action Plan which has enabled the university to reduce emissions by 16% as of 2012.

The Interchurch Center Gets an Insulation Upgrade

“We are proud to provide our tenants with a more energy-efficient and environmentally responsible workspace.

After an employee at a well known university was burned while working near the bonnet of a large gate valve, Thermaxx Insulation was called in to correct the safety issue. Once the new insulation cover was installed, not only was the burn hazard eliminated, but the school realized a savings of $450 per year per bonnet as an added benefit. This is a prime example of what just one insulation blanket can do

ThermaXX entered into contract September 2011 with Western Connecticut State University (WCSU) to provide Removable Insulation Jackets and Removable Insulation Covers in a mechanical room at Higgins Hall. The mechanical room was a typical university with steam. Although insulated during construction in the 1950’s, the insulation has since been removed and damaged as a result of day to day activities.

ThermaXX completed an energy survey and worked with the maintenance department to prepare a scope of work that included replacing missing pipe insulation and installing removable jackets on the components such as steam traps, gate valves, wye strainers and PRV’s. In addition to heat loss, the work environment ambient temperatures were uncomfortable and approaching 90f. The insulation reduced the temperature in the mechanical room substantially

George Washington University had a problem. The compressors on a large chiller unit near a residential area were extremely loud. They needed to find a solution to their noise problem to address complaints from neighbors in that residential area. After installing sound insulation developed by Thermaxx Jackets LLC, the noise was immediately reduced, providing a quick and affordable solution

NRG’s Devon Repowering Project will provide more needed electricity to southwest Connecticut by developing additional reliable, cost effective and clean power at the Devon Plant in Milford. The Devon Repowering Project will replace existing units 7 & 8 with 200 megawatts (MW) of natural gas powered generation – enough to power over 160,000 homes – to an area of the state where it is difficult to import electricity. The repowering will consist of four 50 MW General Electric LM 6000 combustion turbines