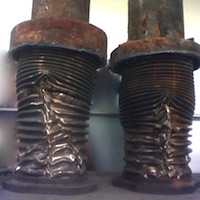 “Should I insulate my steam traps?” That’s a question we get asked regularly, and there seems to be some confusion about whether or not you can or should do this. The answer is simple — yes.

Let me explain. There are some types of steam traps that are perfectly safe to insulate, and steam trap insulation jackets can save you a hefty sum. Reduced heat loss from the trap means you’re getting more from your steam system, which leads to increased energy and money savings.

Alternatively, you don’t want your steam system to look like this: Which could be the result of insulating certain types of steam traps.

So, which types of steam traps are OK to insulate?

Let’s say you’re a university that’s looking to save some energy and money. You’ve noticed that your steam traps aren’t insulated, and that you’re losing heat from them. All 500 of them. Upon closer inspection, you find out that about 200 are of the type that can be insulated. Go ahead, do your money dance, nobody’s looking.

Of course, that leaves about 300 steam traps that should not be insulated. In this category of steam traps are:

Why should you never insulate these steam traps?

Thermostatic traps work by opening the valve based on the temperature difference between the steam and the condensate. If you insulate these traps, it takes the condensate longer to cool and the valve won’t open as frequently. This can lead to condensate backing up into the system, potentially causing water hammering or implosions – neither of which is good.

Thermodynamic traps are similar, except they operate based on differences in pressure instead of temperature. Unfortunately, insulating these traps will have the same disastrous results as with thermostatic .

So what should you do with these types of steam traps? Leave them alone and look at other areas to save heat and money – like your valves, flanges, expansion joints, heat exchangers and other commonly uninsulated systems.