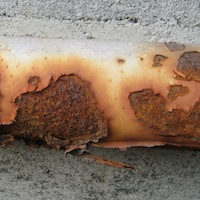 What it is and how to prevent it

Corrosion under insulation (CUI) is the corrosion of piping and vessels that occurs beneath insulation as a result of water penetration. The water can come from rain water, leakage, deluge system water, wash water, or sweating from temperature cycling or low temperature operation such as refrigeration units.

Unfortunately, because the corrosion is hidden under the insulation, CUI tends to remain undetected until the insulation is removed for inspection or when leaks occur. CUI is a common problem across many industries, including refining, petrochemical, power, industrial, onshore and offshore industries.

In 2001, a study commissioned by Congress was completed by a research team of corrosion specialists. The study, titled “Corrosion Costs and Preventive Strategies in the United States” reported the direct cost of corrosion to be $276 billion per year, with that number potentially doubling when indirect costs are also considered.

Another study, commissioned by ExxonMobile Chemical and presented to the European Federation of Corrosion in September 2003 indicated that:

Causes of Corrosion Under Insulation

For CUI to form there must be two basic ingredients: moisture and warm temperatures. For iron products like carbon steel piping and equipment, oxygen is also required. To have chloride stress corrosion cracking (SCC) of 300 series stainless steel, there also must be the presence of chloride ions.

Obviously, oxygen is abundant and readily available. But maybe surprisingly, so too are chloride ions, which can be found in a wide variety of places from seawater, drinking and process water, and chloride chemical compounds to roadway de-icing salts. The presence of acids, acid gases, strong bases and salts can also create and accelerate corrosion.

Moisture in its many forms can find numerous ways to get under an insulation system. Rainwater is the most obvious method, but there is also flooding of insulation systems in low-lying areas and water from pressurized water wash down or local steam leaks. Water can also come from fire protection sprinkler systems, which can be as bad as or worse than any rainstorm.

The next source of moisture is water vapor penetrating and soaking down the insulation systems operating at or below ambient temperatures. The final source is ice, normally cold service insulation systems operating below the freezing point. Although insulated piping and equipment under a layer of ice do not corrode significantly since the temperature limits the available heat and oxygen (two of the three necessary elements of corrosion), it provides a near ideal corrosion area where the ice is continually freezing and thawing.

Operating temperature is the next most important element. Above 300 F, most moisture that finds its way into the insulation system evaporates before it can get to the surface and start corrosion. Below 32 F, because of relatively low energy levels, corrosion rates are dramatically reduced and the formation of ice limits the amount of oxygen available. However, between 32 F and 300 F is where CUI can happen for carbon steel, and between 140 F and 300 F for 300 series stainless steel. The “optimum” temperature range for aggressive corrosion on both carbon steel and 300 series stainless steel is between 200 F and 240 F. In this range, there is plenty of heat energy but not enough heat to efficiently evaporate moisture before it contacts the equipment surface.

Other techniques that are available include special eddy current techniques, x-ray, and remote TV monitoring and electro-magnetic devices.

Since most elements in the environment that contribute to CUI are very difficult or impossible to control, the only hope of prevention lies in properly dealing with the other factors contributing to CUI: insulation design and specification, installation craftsmanship and maintenance.

Often the original design of the equipment is the start of CUI problems. Piping or manway openings for equipment that are sized too short to extend past the weather barrier of the insulation system provide an optimal pathway for water, corrosive chemicals and contaminates to get into the insulation to start corrosion. Facility designs like pipe racks that do not leave adequate room for insulation to be installed without interfering with the insulated pipe or equipment next to it also provide a likely spot for future corrosion.

Caulking and sealants are the final barrier to moisture intrusion and may be installed improperly in a number of ways, or not at all.

Proper insulation maintenance is primarily about early detection and correction. Periodic inspection of insulation systems will help identify early failure signs, especially CUI problems. Some staining on the jacketing can suggest moisture under the jacket. Once problems with insulation systems are identified, they should be repaired as quickly as possible to prevent further contamination and corrosion, including the resealing of inspection ports.