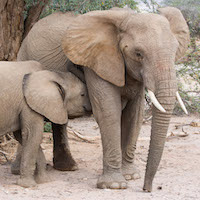 This article was written by Mike Bannon & Frank Kaputa. 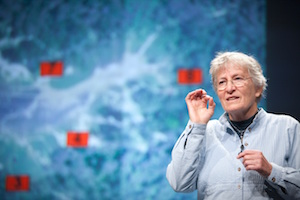 Katy Payne, while working at the Washington Park Zoo in Portland Oregon, discovered that elephants communicated with one another via infrasound – sound below 20 hertz (Hz). The human hearing range lies somewhere between 20 Hz and 20,000 Hz. The elephants were communicating at frequency levels outside the range of human hearing. She stumbled upon her discovery because she believed she felt their vibrations and not because she heard them communicating. William Langbauer Jr., Elizabeth Thomas, and other scientists proved Katy correct; elephants did communicate with one another using low frequency sounds. 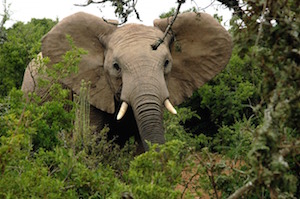 We now understand that other animals communicate in such a fashion. The hippopotamus, rhinoceros, giraffe, and alligator all use infrasound to communicate. The Sumatran rhinos produce sounds as low as 3 hertz. In the tiger’s roar scientists have recorded frequencies as low as 18 hertz. Later Payne would go on to study elephant communication by setting up microphones and recording Central African and Ghana elephants.

A sound wave is a disturbance in the medium. The sound wave spreads out to fill the medium. Lower frequencies spread out more than higher frequencies. Diffraction occurs when a sound wave moves from one medium and encounters an obstruction or an opening like an open window or doorway.   The part of the wave that hits the wall is either reflected, absorbed or both. The wave that passes through the opening is temporarily shortened and then after it passes the opening it expands to fill the medium. See the diagram below. 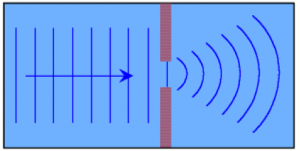 Because lower frequency sounds spread more than higher frequency sounds, they experience more diffraction. The higher the frequency the less diffraction occurs and vice versa. Light waves come in extremely small wave lengths. If you look at your shadow it appears that the light does not diffract at all; for centuries scientists used this observation to conclude that light does not come in wave form. However, with a trained eye and sophisticated equipment we know that light waves exist and do diffract slightly. 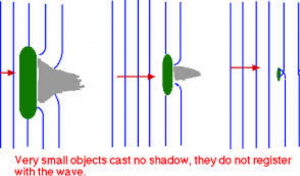 The sound waves below illustrate how high and low frequencies behave. The low frequency spreads out and fills the medium. The high frequency is more channeled. Bats use high frequencies to hone in on small prey like mosquitos. As forest dwellers, elephants effectively use low frequencies to communicate in the African forest. As the elephant communicates, the low frequency sound spreads out to fill the medium (the forest air), diffracting around forest obstacles like trees rocks, bushes, and other obstacles. This phenomenon helped explain two mysteries: first, it explained how males located females for breeding hundreds of kilometers away; and second it helped explain how elephant families, separated by many miles, were able to find one another in dense forests.

Elephants also produce low frequency sounds that can travel through solid ground and be detected by elephants using their feet. Due to the shadow acoustic effect, which we addressed in an earlier article, elephants can communicate 10 times farther at night than they can during the day.

A Note on Infrasound

Infrasonics is the study of sound from 0.001 Hz to 20 Hz – below the threshold of human hearing. This frequency range can be used for monitoring earthquakes, charting rock and petroleum formations below the earth, and in WWI, the Allies used it to locate incoming artillery. Hours before the Indonesian Tsunami, witnesses recalled animals quickly vacating the areas that were to be hit. They may have sensed the low frequency sounds. 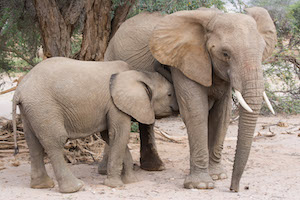 For sound control engineers the concept of diffraction is an important one to understand. Sound barriers that possess gaps will have difficulty combating low frequency noise. As the low frequency sound wave passes through a gap, some of the wave’s intensity will be absorbed into the sound barrier while some will pass through the opening and immediately begin to spread and fill the medium. Sound barriers will ultimately perform better when combating higher frequency noises. It is fortunate that the higher frequency noises tend to be the most irritating to listen to.